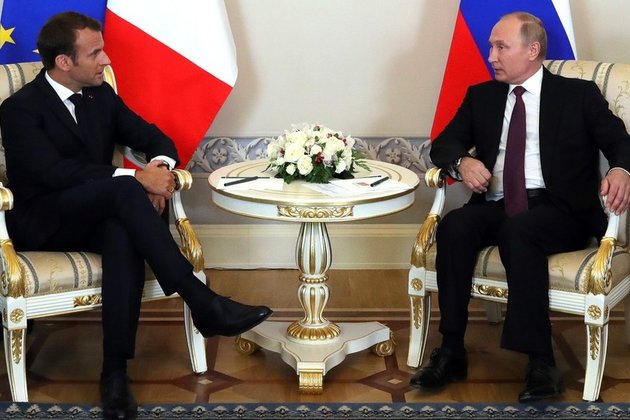 The ?time is not right? for talks between Vladimir Putin and Emmanuel Macron, the Kremlin said

Russia considers France an "unfriendly" country because of the steps Paris is taking against Moscow, Kremlin spokesman Dmitry Peskov told reporters on Friday, adding that the time is not right for contact between their leaders.

"First of all, France is an unfriendly nation, owing to all the measures France is taking against this country," Peskov emphasized when asked why Russian President Vladimir Putin and his French counterpart Emmanuel Macron have not been in touch lately.

"As for [the two leaders] not having any calls lately, they simply do not feel like the time is right just yet, and there is currently no need for talking. If the need does arise, they will be able to get in touch whenever they want to," he said.

Russia's "unfriendly countries" list - introduced back in March in response to Western sanctions over its offensive in Ukraine - includes the EU states, US, UK, Canada, and a number of other nations. Moscow has slapped its own restrictive measures against all of them.

Since the start of Russia's military campaign in Ukraine, which began on February 24, Macron has made dozens of phone calls to Putin. In early June, the French president estimated they had spoken for at least a hundred hours this year. Throughout their talks, Macron reportedly tried to convince the Russian leader to pull his troops back from Ukraine.

Macron's willingness to keep in touch with the Kremlin even as most Western countries are making efforts to isolate Moscow, as well as his calls to avoid "humiliating" Russia over Ukraine, have drawn some criticism from France's allies.

However, the two leaders have not spoken since July 2.

Russia sent troops into Ukraine on February 24, citing Kiev's failure to implement the Minsk agreements, designed to give the regions of Donetsk and Lugansk special status within the Ukrainian state. The protocols, brokered by Germany and France, were first signed in 2014. Former Ukrainian President Pyotr Poroshenko has since admitted that Kiev's main goal was to use the ceasefire to buy time and "create powerful armed forces."

In February 2022, the Kremlin recognized the Donbass republics as independent states and demanded that Ukraine officially declare itself a neutral country that will never join any Western military bloc. Kiev insists the Russian offensive was completely unprovoked.