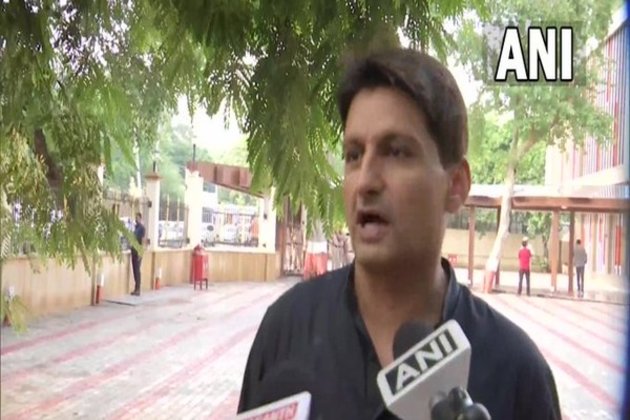 New Delhi [India], August 5 (ANI): Congress MP Deepender Singh Hooda on Friday warned the government of hitting the roads again to protest against the price rise and unemployment if the Centre does not allow discussion on the said issues in Parliament, besides the Agnipath scheme, the government's short-term recruitment plan for armed forces.

"We want to discuss unemployment in the Parliament and appeal to the government to control inflation and take back the Agnipath scheme. If they won't let us allow to discuss then we will come on the roads," said Hoods at New Police Lines Kingsway camp PS while being detained by Delhi Police.

Congress on Friday staged a massive protest country-wide against the issues of price rise and unemployment.

Taking a dig at the Centre over the detention of Congress leaders during the protest, the Congress MP further said that the central government should make a Police line instead of a new Parliament building.

"Center should make Police line instead of new Parliament along with making ED office in the building of Parliament if they want to detain MPs when the Parliament is functioning," he added.

The Delhi Police has imposed Section 144 of the CrPC in the New Delhi district except for Jantar Mantar ahead of the Congress party's call for nationwide protests against inflation and unemployment.

The Congress today is holding nationwide protests against rising prices, unemployment and GST rate hike. In Delhi, the party leaders are marching to the Rashtrapati Bhawan from the Parliament. The party's state units will hold similar protests across the country.

Visuals showed Congress General Secretary Priyanka Gandhi Vadra jumping over a police barricade placed near the AICC office here during a party protest against price rise and unemployment in Delhi. She was later detained by police during the Congress protest.

"Our job is to raise the issues of the people...Some Congress MPs detained, also beaten by police," said Congress MP Rahul Gandhi to reporters during a protest against price rise and unemployment at Vijay Chowk.

"All Congress MPs were marching towards Rashtrapati Bhawan to raise the issue of inflation and price rise but they are not allowing us to go ahead from here. Our job is to raise the issues of the people...Some MPs detained, also beaten," he said prior to being detained.

Meanwhile, Congress leader Rahul Gandhi, addressing a press conference, said that there is no democracy in India now and that our country is under the dictatorship of four people.

Congress party leaders Sonia Gandhi, Rahul Gandhi, Priyanka Gandhi Vadra and MP Mallikarjun Kharge among others chose to sport black outfits to mark their support for the protests called by Congress on price rise and inflation.

Comparing PM Modi with Hitler, Rahul Gandhi said, "Hitler had also won elections, he too used to win elections. How did he use to do it? He had control of all of Germany's institutions...Give me the entire system, then I will show you how elections are won." (ANI)

BERLIN, Germany: The German government's basic COVID-19 restrictions would return this fall and winter, when experts expect cases to rise ...