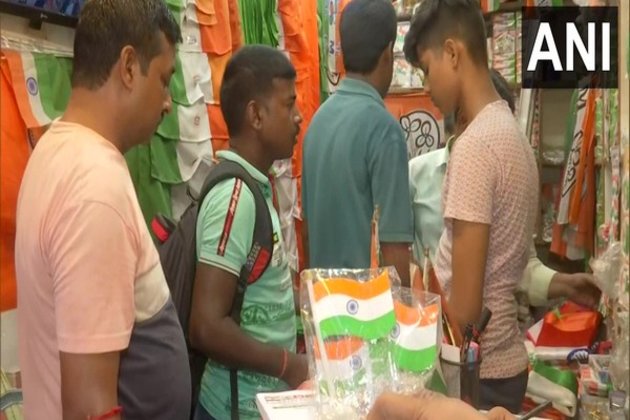 Thiruvananthapuram (Kerala) [India], August 4 (ANI): There has been a huge demand for the national flag which has created a shortage in supply in Kerala after the government of India called on citizens and institutions to hoist the national flag on Independence Day.

Sulaiman Sayd, the owner of Thiruvananthapuram's oldest flag shop said that they have placed the orders one month in advance, but the government appealed to all houses and institutions to hoist the flag. Due to this, the stock is coming from other states, but there is a shortage.

He said, "Now there are bulk orders but we are unable to deliver them. Even though we tried to source it locally, then too, there is a shortage."Meanwhile, the union government has changed the country's flag code to allow the tricolour to fly both in the daytime and at night now. Polyester flags can also be produced by machines.

Another PRS Kodikkada shop owner, Shanalkala told that there is a shortage and there are bulk orders also. They have their own printing units and eight women are stitching flags in their own houses.

"Now the government has given the permission to make it in polyester cloth. There is a shortage of cloth coming from outside, so we are taking the cloth from Kerala and doing it on polyester cloth now. As we have our own system, we are able to deliver all bulk orders," he added.

He also said that the number of orders is increasing. There are orders for 5,000 to 10,000 flags and the Residents' associations are also giving bulk orders.

Another shopkeeper said, "We're getting demand for supply of national flag from many apartment complexes. Due to high demand, we're only making flags right now. I've been operating this shop for many years, but this year the demand for Tricolour is very high."Whereas in Karnataka a shopkeeper in Bengaluru said that there is a rise in demand for the Tricolour in view of the 'Har Ghar Tiranga' campaign announced by PM Modi.

"Demand for the national flag is such that we have to manufacture it in cloth varieties other than Khadi, cottonsilk to make it affordable for all. We are happy to support customers and wish that this campaign gains greater momentum in coming years," he added.

Union Home Minister Amit Shah on Tuesday said that the "Har Ghar Tiranga" programme is a message to the world that every citizen of India is united to take forward India's journey of development, prosperity, security and culture.

PM Modi on Sunday called upon all citizens to turn the 'Har Ghar Tiranga' campaign into a mass movement by hoisting or displaying the national flag at their homes and using the 'Tiranga' as a display picture on their social media accounts between August 2 and August 15 to commemorate the 75th anniversary of India's Independence.

"Under the Azadi Ka Amrit Mahotsav, from the 13th to the 15th of August, a special movement - 'Har Ghar Tiranga' is being organized. Let us further this movement by hoisting the National Flag at our homes," said Prime Minister Narendra Modi on Sunday while addressing the monthly radio programme 'Mann Ki Baat'.

'Har Ghar Tiranga' is a campaign under the aegis of Azadi Ka Amrit Mahotsav to encourage people to bring the Tiranga home and to hoist it to mark the 75th year of India's independence.

Azadi Ka Amrit Mahotsav is an initiative of the Government of India to celebrate and commemorate 75 years of independence and the glorious history of India's people, culture and achievements. (ANI)

BERLIN, Germany: The German government's basic COVID-19 restrictions would return this fall and winter, when experts expect cases to rise ...