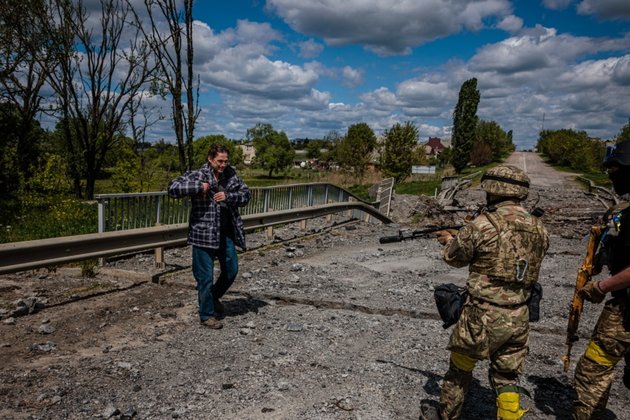 More than 260 Ukrainian fighters were evacuated from the Azovstal steel plant in the besieged port city of Mariupol on Monday, Urkainian officials said.

Fifty-three seriously injured fighters were taken to a hospital in Novoazovsk, east of Mariupol, Deputy Defense Minister Anna Malyar said. Novoazovsk is under the control of Russian troops and Russian-backed separatists.

Another 211 fighters were taken to the town of Olenivka, an area also controlled by Russian-backed separatists, Malyar said, adding that the evacuees would be subject to a potential prisoner exchange with Russia.

During his nightly video address to the nation, Ukrainian President Volodymyr Zelenskyy discussed the evacuation of soldiers from Mariupol.

'I want to emphasize - Ukraine needs Ukrainian heroes alive. This is our principle,' Zelenskyy said. "I think that every adequate person will understand these words. The operation to rescue the defenders of Mariupol was started by our military and intelligence officers. To bring the boys home, the work continues, and this work needs delicacy. And time."

Malyar said efforts are being taken to rescue the remaining fighters inside the plant, the last stronghold of resistance in the ruined southern port city of Mariupol.

"Thanks to the defenders of Mariupol, Ukraine gained critically important time," she said. "And they fulfilled all their tasks. But it is impossible to unblock Azovstal by military means."

Also Monday, Ukraine said its forces had pushed back Russian troops in the Kharkiv region in a counter-offensive that allowed the Ukrainians to reach the Russian border.

The Ukrainian defense ministry posted a video showing what it said were its troops at the border, with one soldier telling Ukrainian President Volodymyr Zelenskyy, "We are here."

A senior U.S. Defense official said the Ukrainian troops were within three or four kilometers of the Russian border.

After repelling Russian advances on Kharkiv, Ukraine's second-largest city, Ukrainian forces have regained territory in the region and sought to push Russia from its staging area in Izyum as it focuses on the eastern Donbas region.

"Kremlin dreamed of capturing Kyiv, Kharkiv and Odesa, then at least the Donetsk and Luhansk regions," Zelenskyy adviser Mykhailo Podolyak tweeted Monday. "Now, Russian troops are concentrated on the Luhansk region due to lack of forces. We continue the treatment of imperial megalomania and make Moscow face reality." 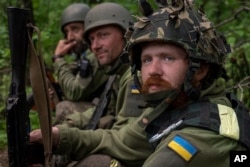 Donetsk and Luhansk are in the Donbas region.

Zelenskyy said in a video address late Sunday that Ukraine was preparing for new Russian attacks in the Donbas and southern Ukraine.

"The occupiers still do not want to admit that they are in a dead-end and their so-called 'special operation' has already gone bankrupt," Zelenskyy said.

'We do know that the Russians continue to take casualties," the official said. "They continue to lose equipment and systems every day.'

Western countries allied with Ukraine are continuing to send more weaponry to Kyiv's forces, with 10 deliveries via airlift from seven nations in past 24 hours, the U.S. defense official told reporters during a background call Monday.

Russian President Vladimir Putin warned the West Monday that Moscow would respond if NATO bolsters its military presence in Finland and Sweden after the two Nordic countries declared Sunday they want to join the U.S.-dominated Western military alliance.

Putin told leaders of a Russian-dominated military alliance of former Soviet states that the expansion of the 30-nation NATO was being used by the United States in an 'aggressive' way to aggravate world stability.

The Russian leader said there was no direct threat from NATO by adding the two countries to its alliance but said, 'The expansion of military infrastructure into this territory would certainly provoke our response."

'What that (response) will be - we will see what threats are created for us,' Putin said at the Grand Kremlin Palace. 'Problems are being created for no reason at all. We shall react accordingly.'

"This is a historic day," Niinisto said. "A new era begins."

On Monday, Swedish Prime Minister Magdalena Andersson told lawmakers in parliament that joining NATO was 'a historic change in our country's security policy.'

'We will inform NATO that we want to become a member of the alliance,' she said. 'Sweden needs formal security guarantees that come with membership in NATO.'

A building damaged by multiple shelling stands in Kharkiv, Ukraine, May 15, 2022.

The two Nordic countries' NATO applications will likely move swiftly, with the alliance's secretary-general, Jens Stoltenberg, saying in recent days that they will be welcomed.

"Finland and Sweden are already the closest partners of NATO," NATO Deputy Secretary-General Mircea Geoana said Sunday in Berlin, where members were meeting to discuss their continued support of Ukraine against Russia's invasion and the expansion of the Atlantic alliance.

Fast food giant McDonald's announced Monday it had started the process of selling its Russian business after operating there for three decades. It is the latest company to exit Russia since the start of the conflict.

McDonald's said in a statement that operating in Russia "is no longer tenable, nor is it consistent with McDonald's values." The company had already suspended operations at its 850 Russian restaurants.

National security correspondent Jeff Seldin contributed to this report. Some information for this story came from The Associated Press, Agence France-Presse and Reuters.