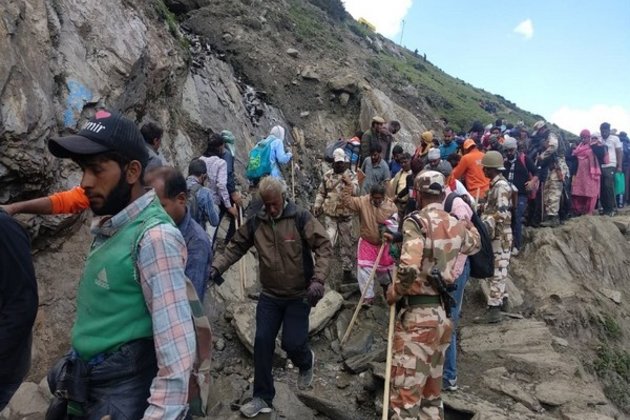 New Delhi [India], May 13 (ANI): Union Home Secretary Ajay Kumar Bhalla on Friday held a high-level meeting to review the security preparedness for Amarnath Yatra as the annual pilgrimage is all set to commence on June 30 after a gap of two years.

Amarnathji Shrine Board members also participated in the meeting through video conferencing.

Bhalla, sources said, was apprised of security updates and department of Central Armed Police Forces on specific locations during the pilgrimage as well as the situation in the region.

Sources in the government said that Union Home Minister Amit Shah is also expected to hold a security review meeting very soon regarding the pilgrimage after the second round of review-meet completed by Bhalla on Friday.

Resuming the Amarnath pilgrimage is a challenging task as Jammu and Kashmir has witnessed several incidences of targeted killings in the last few months by terrorists following which the Ministry of Home Affairs asked security agencies operating in Jammu and Kashmir to enhance counter-terror operations.

However, online registration for Amarnath Yatra 2022 started on April 11 and the Home Ministry has already sanctioned nearly 50 companies of CAPF for the purpose to provide security during the pilgrimage as Jammu and Kashmir is expecting nearly three lakh pilgrims visiting the Amarnath cave shrine this year.

While online registration has already begun, the pilgrimage is scheduled to be held for 43 days between June 30 and August 11.

Amarnath shrine pilgrimage to the 3,880-metre-high cave shrine of Lord Shiva, located in the upper reaches of the Himalayas, is held from the twin routes of Pahalgam and Baltal.

The Jammu and Kashmir government had cancelled the annual Amarnath pilgrimage due to the prevailing COVID-19 situation in 2020 and 2021. For the first time, the Amarnath Yatra was cancelled in 2019 a few days ahead of the revocation of Article 370, and 35A was withdrawn from Jammu and Kashmir and all travellers were asked to return as soon as possible. (ANI)

Report: Germany has taken in over 700,000 refugees from Ukraine

DOLNI MORAVA, Czech Republic: The world's longest pedestrian suspension bridge has opened at a mountain resort in the Czech Republic. ...

ZAGREB, Croatia: Croatian lawmakers have voted to allow the introduction of the euro currency in 2023. Lawmakers voted 117-13 to ...

Turkey voices reservations about Sweden and Finland being members of NATO

BRUSSELS, Belgium: Three years after the adoption of the landmark EU copyright rules, Google is set to pay 300 publishers ...

China lashes US for change on website supporting Taiwan independence

BEIJING, China: China's Foreign Ministry rebuked the U.S. for changing the wording about Taiwan on the State Department website, stressing ...

VATICAN CITY: While recovering from knee problems that have forced him to use a wheelchair last week, Pope Francis announced ...

It's not politics but Holy War for me: Imran Khan

SIALKOT, Pakistan - Pakistan Tehreek-e-Insaf (PTI) Chairman Imran Khan has claimed that a plot to kill him was being hatched, ...

Report: Germany has taken in over 700,000 refugees from Ukraine

US pressured by airlines to lift Covid testing requirements

WASHINGTON D.C.: The U.S. airline industry is pressuring the Biden administration to lift a 16-month-old regulation requiring a negative COVID-19 ...

DOLNI MORAVA, Czech Republic: The world's longest pedestrian suspension bridge has opened at a mountain resort in the Czech Republic. ...